The Big Five & the MBTI Personality Test: What’s the Difference?

Obviously, every person has a unique personality that develops and changes over the years. It’s the reason why you might instantly become best friends with some people, while with others you never quite feel like you’re on the same wavelength.

It's safe to say, the field of personality research has progressed substantially over the years. Today, with the various theories and personality science, not only are personality tests used to better understand the characteristics of ourselves and those around us but it is seeing a surge in use in the hiring scene, for instance, in pre-employment assessments and assessing employee culture fit's within workplaces.

The Importance of Understanding your Personality

Personality is the coherent patterning of effect, cognition, and desires as they lead to behaviour. To put it simply, studying personality allows us to understand how and why people feel and think what they do, through responding differently to emotional stimuli in their environment.

Being aware of your personality type can profoundly influence how well you navigate through life — in your work life, family and love life, and social life. For instance, from a working perspective, understanding your personality essentially can help you find the right working culture that fits you, and therefore determine how integrated and motivated you are in your job.

Want to know more about why it's important to understand your personality? Read our blog on personality types here. 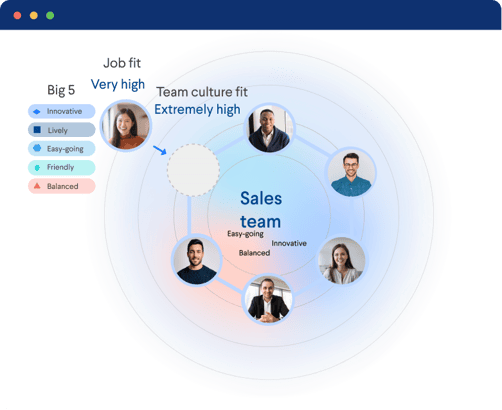 Our artificial intelligence software at Retorio is based on empirical and scientifically-validated research: The Big 5. In fact, we transfer the Big 5 to a digital format which is essentially the core of our video analysis AI.

But despite the Big 5 lying as the scientific foundation of our product, by no means did we coin the theory. In fact, researchers have spent countless years attempting to pinpoint character traits as a way of analysing people’s behaviour. What was the result? Well, it is said that the principle theory for what we today call the Big 5 Theory initially emerged in 1949 by D. W. Fiske, an American psychologist, who specialised in methodological issues in personality, ability, and trait research. Although later, his initial theory was expanded upon by other psychologists, namely Norman (1967), Smith (1967), Goldberg (1981), and McCrae & Costa (1987).

So, what are the big five personality traits?

The five basic dimensions of personality referred to of course as the "Big 5" are openness, conscientiousness, extraversion, agreeableness, and neuroticism (commonly shortened to the acronym 'OCEAN'). These five dimensions are considered to be the building blocks of personality, and these factors have been used to measure and develop a better understanding of individual differences in personality since the late 20th century. This five-factor model, or the Big 5, is said to be the foundation of personality characteristics, and the MBTI personality assessment and Enneagram typology system actually pull from the Big 5 theory.

But this does not mean these personality assessments are the same. Unlike the Big 5, which places certain personality traits high or low, the MBTI and Enneagram give a personality type.

The MBTI is based on sixteen different personality types and essentially categorises you into one of these sixteen profiles once you finish taking the personality test. Based on 93 questions, the MBTI personality test states that it can find not just your personality, but predict your fit to various jobs, effect on others, how your emotions guide you, and so on. As an example, according to the MBTI personality test, an INTP, or the 'logician' as they categorise it, is someone who is more introverted than extraverted, intuiting than sensing, thinking than feeling, and judging than perceiving.

However, due to the lack of research behind this personality assessment, it doesn't come without its criticism. In fact, the entire theory has even been called an “act of irresponsible armchair philosophy.”

The initial theory of personality archetypes was developed in the 1940s, and that was derived from the theories of Carl Jung (which weren't actually ever tested). Furthermore, the personality traits reportedly predict your performance at various job positions, marriage, friendships. But research that has been conducted has shown that the personality test isn't exactly effective at predicting people's success at various jobs. In fact, half of the people taking the test get different results when they take it more than once. Adam Grant, who is an organizational psychologist at the University of Pennsylvania reports that "the characteristics measured by the test have almost no predictive power on how happy you'll be in a situation, how you'll perform at your job, or how happy you'll be in your marriage." Even when he himself took the test with a few months gap between, he received polar opposite personality category results.

There isn't only one validated rating scale to measure personality - in fact, personality assessments usually rely on either observer ratings or self-assessment to collect data.

So what's the difference between these two measurement methods?

Self-reporting concentrates on how an individual measures their own internal dynamics. On the other hand, observer ratings focus on how a peer or a neutral observer perceives the personality of an individual.

Despite the fact that these two methods tend to produce overall similar results, observer ratings are based more on social behaviour, meaning that it's formed by how others perceive an individual. On the contrary, self-assessments are shaped by own feelings and motives.

So when is it best to use which method? In terms of a hiring and recruitment context, it is said that observer ratings in fact have a higher predictive validity over self-report personality tests. For example, in an experiment looking at whether observer ratings from supervisors, co-workers, or customers could predict performance; they found that Conscientiousness and Extraversion assessed externally were valid predictors for job performance, as opposed to self-assessments, which tend to not offer the same predictive accuracy.

Personality Assessment in the Recruiting Process with AI Hiring Software

And what happened as a result?

The use of artificial intelligence (AI) for talent acquisition teams soared at unprecedented rates. Video hiring platforms and AI personality software's became one of the most important tools for HR teams; not only to streamline the recruitment process and keep up with the volume of applicants in a hybrid setting but to gain deeper insight into their candidate pool.

Through the use of AI recruiting technology and incorporating culture fit questions, HR managers are able to better understand if a potential candidate's personality will fit into the company's culture. After all, people are the key to any successful organisation.

The hopes of finding the perfect pool of candidates that work in a team together well and motivate each other may seem like a distant dream for some HR managers. But, thanks to the entry of video hiring platforms and other AI recruitment software's, recruiters have a lot to thank for.

Adding artificial intelligence systems into the human recruitment process has proven to allow HR managers and employee's to gain further insight into potential candidates, assess culture fit, even from a virtual setting. As a matter of fact, companies like Happycar (Case Study) use Retorio's AI hiring software to gain faster and deeper insights into their talent pool, and their machine learning algorithms is supporting HR departments and executives around the world.

Want to read about how Retorio's latest recruit got her job with AI? Click here!

Or want to try the AI out for yourself? Click the free demo button below to see how Retorio can help you gain a better understanding of personality, and culture fit, and essentially help save costs by recruiting faster and smarter.

How I Got My Job Thanks to AI