What AI is and what it means for the recruitment process

Due to a survey done by the IFS on 600 business leaders worldwide and a broad spectrum of industries, 90% of companies are implementing artificial intelligence (AI) projects, to make business operations more efficient.

AI mostly powered by Machine Learning is no longer a niche appearance and can be used to make the following steps easier also in recruitment:

But how can the uplift of artificial intelligence be justified? And what exactly are we talking about when using the term AI?

Why AI? Automation in your recruitment process

Weirdly, the work we have to do in order to fulfill increasing requirements is growing day-to-day. In this sense, artificial intelligence differs from single human capacity due to its extraordinary ability to compute a massive amount of data with its advanced algorithms. Because of its accuracy in dealing with everyday processes, artificial intelligence offers a number of opportunities for dealing with the growing demand for tasks fulfilled faster and more data-driven --demands which recruiting is not spared from. AI additionally offers a valuable asset of personalization of services --both for recruiter and employee.

Functions of self-service transactions, recruiting and talent acquisition, payroll, reporting, assessing and easily accessing policies and procedures. This all can be aimed at what current human resources practices focus on: improving the employee experience to enhance the organization’s overall performance.

Automatizing administrative or bureaucratic tasks permits recruiters to have more time and resources to focus on critical steps in their recruitment process. And allows small businesses to be competitive regardless of their size --those that are smart and brave enough to employ such tools.

Need for Digital Competency in HR

In Harvard Business School’s latest global survey, one of the startling findings was, on average, HR professionals lagged far behind other professionals in working within a “highly digital environment and (using) data to guide business decisions”. This creates a credibility gap between HR and higher-ups. Only 11% of business leaders trust their HR departments to integrate data into how they find and advance talent. For the modern HR professional, tying HR metrics with bottom-line success is key. Scaling a team’s data skills in tandem with getting people-first will become a necessary art as the role becomes a liaison between technology and people.

But while we’re talking about the necessity to implement AI, let us start with defining the term artificial intelligence.

Due to Tom M. Mitchell, Professor at the Machine Learning Department at Carnegie Mellon University, this will be the question: “How can we build computer systems that automatically improve with experience, and what are the fundamental laws that govern all learning processes?” Finding an answer to this question is what AI researchers are kept busy with day and --let’s be honest-- mainly night.

The ability to improve with experience has long been a trait characteristic of human intelligence --and other living creatures more broadly. Such behavior includes learning, reasoning and self-correction. But now, we are aiming to build computers that can mimic --and maybe even exceed-- such behavior.

Due to the Oxford dictionary, AI comprises “theory and development of computer systems that are able to perform tasks normally requiring human intelligence, such as visual perception, speech recognition, decision-making, and translation between languages”. These systems of intelligence can --like human intelligence itself-- be built to adapt to a number of circumstances or tasks.

All along this definition of term: AI is not AI. In fact, it can be categorized into less broadly applied mechanisms of:

Most likely, the latter will not evolve without human control, nor replace human intelligence completely, but act in symbiosis with such.

Since 1956, there has been a lot of hype surrounding the term artificial intelligence and related industry, and many scientists agreed that human-level AI was just around the corner. While it is obvious, that implementing AI will in long-term replace lengthy manual tasks and thus reduce financial and time costs. There are, however, still major challenges along the road -that popular media often don’t shed any light on. Like the fact that success in human-imitative AI --emphasizing that the artificially-intelligent entity should seem to be one of us, if not physically then at least mentally -- has in fact been limited due to the following reasons:

Alongside these technical challenges, come the wide-spread concerns about security, integration and validity. Those need to be addressed by the respective AI-service providers and will not be discussed in detail in this article. Instead, we will --after having defined and critically considered the phenomenon-- talk about how to skillfully employ AI tools in the different steps of your recruitment process. 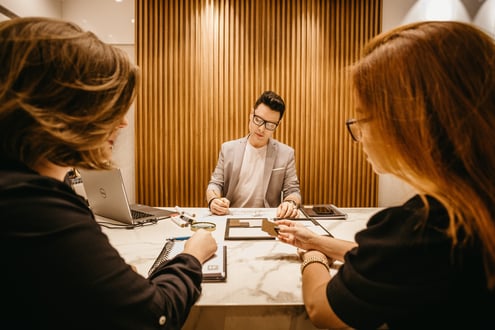 How to skillfully employ AI tools in HR

An increasing number of tech companies like Tesla or Google are declaring traditional recruiting variables like grades, degree and work experience to be obsolete. As a consequence, personality traits such as being creative, curious, passionate and leadership-oriented are coming to the fore. This especially affects candidate sourcing and selection --where companies are looking for talent and how they identify such.

Job openings are now filled more often by hiring from the outside than by promoting from within. Through information that people share online (e.g., CVs, social media posts, searches, etc.), AI can identify passive and active candidates who match your hiring profile, and even how likely they are interested in a new job. In fact, 73% of global professionals are passive candidates willing to accept a better job offer.

From automating job descriptions to looking for candidates via social media, technology is reshaping how people are found and developed.

The amount of applications companies receive is astounding. Google alone receives over 2 million applications per year! Pre-employment tests or employee screening tests are used to help identify the traits or skills that ascertain whether a person would be a good fit for a job position.

Online assessment and mobile testing have become a huge part in creating an easy preselection process and are further advanced by artificial intelligence. In the past, applicants applied for positions based on job postings, a hiring manager sifted through a pile of resumes, and researched the applicant online. With artificial intelligence, a number of these activities can be quickly done, saving time for hiring managers on the more rudimentary tasks: finding the top candidates efficiently. Retorio’s AI video software offers recruiters the chance to learn about a candidate’s personality via recorded responses.

Additionally, throughout the assessment process, AI can help on the following angles:

Artificial intelligence can support hiring managers by tracking and analyzing multiple data points in interviews. The manager is the one receiving and facilitating the input and output generated by the AI. This can naturally be done by implementing video as par to the interview process --like the one Retorio provides.

Such technology provides a helpful strategy in learning more about an applicant by using metrics such as visual input from facial expression and gesture, as well as auditive information like speaking speed, language sentiment and engaging language in order to assess candidate-company fit.

A video interview is one way to humanize a candidate, sensing their own body language, facial expressions, how they speak to the camera, or make eye contact.

Additionally, with the help of an AI model, recruiters can quickly sort the candidates according to their search criteria --decreasing the time-to-hire by 30%. It’s outsourcing the technical sifting through an individual interview and allows recruiters to contact potential hires faster.

After interviews have been conducted, AI-based recruiting also ameliorates the follow-up experience on interviews --for candidates and companies likewise-- in the way that feedback can be submitted faster and more personal.

With increasing importance in how companies navigate the globalized world, HR professionals will become the subtle manager of billions of people. AI will play the biggest supporting role in how managers recruit, develop, and advance talent. Given Moore’s Law of exponential growth, HR managers and companies don’t have much time to waste. The war on talent is real and accelerating. To gain a sharp competitive advantage, companies need to begin now in integrating AI into their talent strategy.

In doing so, they should employ certain quality criteria when choosing an HR AI.

While AI tools such as Retorio can be used as a guide to help recruiters make more intelligent and quicker hiring decisions, don’t worry that technology will entirely take over; humans are still much better at making complex decisions such as final candidate hiring.

Instead, consider AI as a knowledgeable peer who can ease the recruitment process for you and make processes more efficient.

A Global Pandemic is Leading to Hiring 2.0: Are You Ready?

Remote Work Tips: Video Recruiting in the time of Corona